NOTE: This post was originally published on my previous blog, Recovering Shopaholic.

One of my favorite places to walk is on Shelter Island, which is right down the street from where I live.  Over the almost 14 years that I have lived in San Diego, I’ve probably walked on Shelter Island thousands of times!   Shelter Island is not actually an island, as it’s connected to the mainland by a narrow strip of land.   The “island” is 1.2 miles (1.9 km) long and only a few hundred feet wide and is home to a number of marine-related businesses, hotels, and restaurants. A single street called Shelter Island Drive runs the entire length of the island.

When I started taking photographs about a year ago, Shelter Island was one of my first locations for photo shoots.  I now have hundreds of photos from this picturesque destination, so I thought it would be a great subject for one of my photography interludes. For those who are new to the blog, I periodically post my photos to celebrate that I now have hobbies and interests outside of shopping, as well as to share glimpses with readers of the beautiful area in which I live.

Now that I have so many photos from various locations, I need to figure out a good storage method for them!   If any photographers out there (either amateur or professional) can offer recommendations in this regard, I would greatly appreciate it.  Ideally, I’m looking for a solution that is either free or low-cost, as my photography is still just a hobby and I don’t want to spend too much money on it just yet.  My husband mentioned Google Photos (formerly Picasa) and Windows Live Photo Gallery as free options, but I am definitely open to other suggestions as well. For the record, I have a PC and an Android phone (I take photos both with my phone and my Nikon D3300 camera).

It was difficult to choose from among my many Shelter Island photos, but here are some of my favorites, along with some notes about the specific locations.

This first photo is of the relatively new Shelter Island sign that marks the entry onto the island. 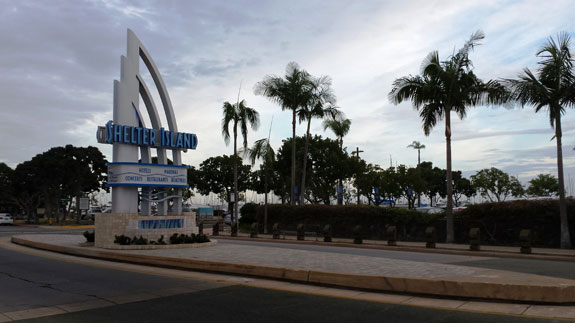 On one side of Shelter Island are four hotels and a large marina filled with hundreds of boats.  There is a nice walkway on that side where I like to walk.   On cloudy evenings, the reflections in the water are quite breathtaking.

One of the hotels on Shelter Island is called the Kona Kai Resort, which is shown in the first photo below.  This hotel is located at the end of Shelter Island and includes a spa, pool, and a beautiful beach, which you can see at night in the second photo below.

The following photo was taken just beyond the Kona Kai Resort.  I often see my favorite birds, the Great Blue Heron (see my last photography interlude on beach birds), out on the dock on the left, so I usually venture out there on my walks.

One of my favorite Shelter Island photos was taken not by me but by my husband.  I love how the setting sun and its rays are visible through the break in the fence.

A very popular San Diego concert venue is located on Shelter Island.  It’s an outdoor location called Humphrey’s Concerts by the Bay.  It seats 1400 people and features big-name acts from yesteryear, as well as “up-and-comers.”  Some of the acts appearing at the venue this season include Bob Dylan, Ringo Starr, Lyle Lovett, Boston, Kansas, Yes, Chris Stapleton, and Tori Kelly.

It’s quite pricey to see a concert at Humphrey’s, but many people get around the expense by paddling a dinghy or kayak around the back of the venue (visible at the left of the photo below) and enjoying the concert from the water.  No one really prevents them from doing this and many of the acts even address the water spectators in their commentary!  It’s also common for people to sit in folding chairs across the street from Humphrey’s, as the sound carries quite well.  My husband and I have heard many a concert during our walks on Shelter Island over the years. 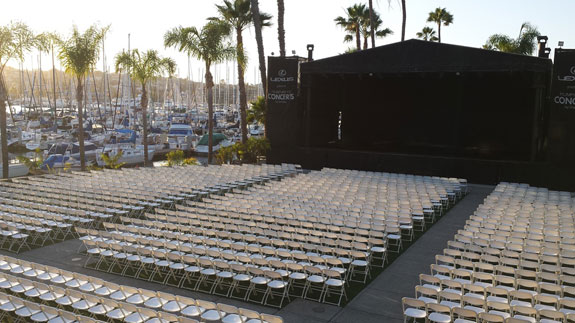 Another popular destination on Shelter Island is the Bali Hai Restaurant, which serves Polynesian food and features an expansive view of San Diego Bay and the city skyline. The Bali Hai offers “dock and dine” service for boaters and is a wonderful location for weddings year-round.  Shelter Island in general is a popular place to get married and we often see weddings during our walks, especially in the summer months.

The photo below was taken outside the Bali Hai, which is why a Tiki statue is visible in the foreground.   Beyond the statue, you can see a cruise ship headed out to sea from the Port of San Diego.  Many cruise ships come in and out of San Diego en route to various Mexican locations, as well as Catalina Island (where my husband and I were married in 2001) and Long Beach. 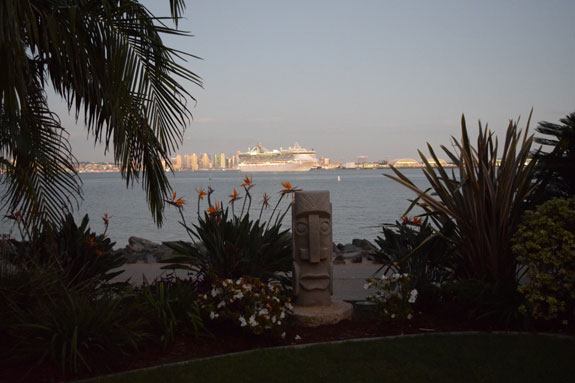 As you could see in the photo above, the city skyline is visible from Shelter Island, which makes it a lovely and romantic place to watch the sun go down.  Of course, to see the actual sunset, you’ll need to head over the hill to the ocean (check out my Ocean Beach sunset photos here), but the colors in the sky are breathtaking enough on their own.  The couple below seemed to be enjoying the pink and purple tones over the city. 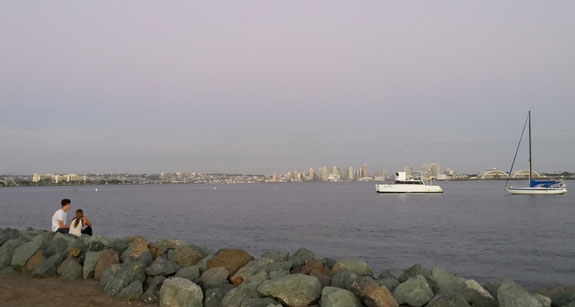 The view on cloudy evenings is beautiful in its own way.   Here you can see Downtown San Diego with dramatic clouds overhead and a few boats in the foreground.

The Bay Side of Shelter Island

When I walk on Shelter Island, I usually do a sort of “loop” in that I first walk along the marina side of the island and then wrap around to the side that borders the San Diego Bay.   You can often see fisherman on the bay side, both on the beach and on the Shelter Island Pier, which is a t-shaped pier that extends 200 feet from the shore and is nearly 500 feet in width.  Some of the fish that can be caught on Shelter Island include Pacific mackerel, yellowfin croaker, kelp and sand bass, halibut, bonito, and various types of sharks.

I’ll close out with a few photos taken on the bay side at twilight, my favorite time of day.   This first one shows the dinghy landing with boats on buoys in the background and some interesting clouds in the sky.

Not far from the dinghy landing is the Shelter Island boat ramp, where fisherman launch their boats at all hours of the day and night.  This is where I see my seagull friends I’ve named “Lefty” and “Righty” because they have broken wings on either side (I mentioned them in my beach birds post).  A lot of birds hang out at the boat ramp, as the fisherman often throw leftover bait and fish entrails overboard as they come back from their fishing excursions.  Sea lions can also be glimpsed in that area, as they want to get in on the “free food,” too.

This last photo is one of my favorites, both because of the gorgeous sky colors and due to the calm that it evokes.  It was taken just beyond the boat ramp on a peaceful evening.

Have a Great Weekend!

I hope you have enjoyed my Shelter Island photos.   I’m sure you can understand why this is one of my favorite places for both walks and photography.   I may live in a small apartment, but it would be hard to beat the location!  I love where I live and I try to get out and enjoy my surroundings at least a few days per week, if not more.  In the coming months, I’ll share photos from two of my other favorite walking and photo-taking locations.

If you liked this post and would like to see more of my photos, check out the rest of my “photography interlude” posts or follow me on Instagram, where I share my images from time to time (I need to be better about it, but I have posted quite a few photos there for you to see).

Check Out My Books